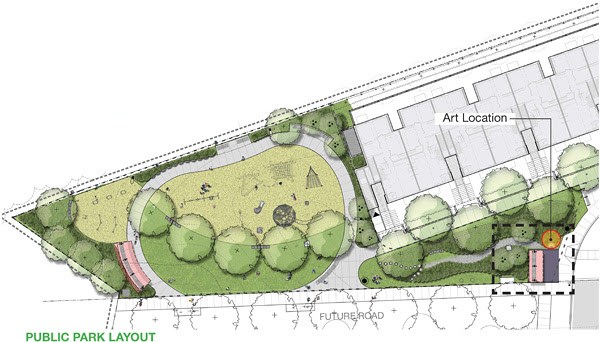 The City of Toronto’s Arts and Culture Services, working with the Etobicoke Historical Society is inviting proposals for the creation of a public heritage memorial to be dedicated to Joshua Glover. Joshua Glover escaped slavery in 1852, and made his way from St. Louis, Missouri into Canada assisted by the Underground Railroad. In 1854 he found work and shelter in the community of Etobicoke. His story was important to the abolitionist movement, and in general to Canada as well.

Fittingly, the project is to be located in the new Joshua Glover Park in Etobicoke in the Lambton Mills area where Glover settled after arriving in Canada. Naming the small park after Joshua Glover was decided by participants of a survey organized in 2015 by the City’s Parks, Forestry and Recreation Division in consultation with the local Ward Councillor out of three possible names that according to new city policy was shortlisted and brought forward.

For much of his life Glover lived in a small house in Lambton Mills, owned by Thomas Montgomery the proprietor of Montgomery’s Inn where Glover found long time employment. He married twice, both times to settler Irish women, which marked two of the earliest inter-racial marriages in Etobicoke. Glover died in an Old Age home in Newmarket at the age of 74, after having been embraced by the community of Etobicoke throughout his life.

No photograph or drawing has ever been found in the historical records of Joshua Glover. To this effect, Arts and Culture Services and the Etobicoke Historical Society aim to add a symbolic sculptural tribute rather than an imagined likeness to Joshua Glover’s memory. Through a one stage public art competition the design concept submissions by professional visual artists or artist led teams will be judged on the strength of their ideas. Artists with lived experience as Canadians of African Descent and artists with lived experience of the African-Canadian diaspora are strongly encouraged to apply.

The first enslaved African recorded on Canadian soil was brought to these shores at the beginning of the 17th century, in 1628. It was only after large uprisings by enslaved Africans in the United States of America and the Caribbean that in 1833 abolitionists managed to successfully convince British law-makers to render slavery illegal on lands now claimed by Canada. This law took effect on August 1, 1834, when approximately 1 million enslaved Africans in British colonies (including what is now Canada) were freed under the British Parliament’s Slavery Abolition Act, (1833). Joshua Glover is important today, as his life story exemplifies one of Canada’s under-explored examples of people of African descent historically working to re-shape Canadian society into one that is more welcoming and respectful to immigrants and refugees.

Joshua Glover’s story also resonates with the citizens of Racine and Milwaukee, Wisconsin. In Milwaukee at the intersection of Glover Avenue and Booth Street there is a large plaque that recounts the dramatic “Rescue of Joshua Glover”. After escaping St. Louis, Glover was recaptured and incarcerated in a jail in Milwaukee. Led by local newspaper owner and anti-slavery activist Sherman Booth, 5000 people stormed the jail, set Glover free and facilitated his journey through safe houses along the Underground Railroad to freedom in Canada. The public outcry surrounding the Glover case and the legal prosecution of Booth after the rescue advanced the cause of the abolition of slavery in the United States.

Joshua Glover’s story has captured the creative imagination of many; it produced books, a play, an opera, and a one man show which had its recent debut at the Montgomery’s Inn museum this past summer. While this visual art commission initiated by the Etobicoke Historical Society is dedicated to the memory of one black man, it carries the burden of history rich in symbolism and will be a fitting addition to the growing cultural production inspired by his life.

Per the Canada Council’s guidelines, a professional artist is defined as someone who:

The successful proposal will be selected by a specially convened Selection Panel, which in addition to art professionals will include members of the Etobicoke Historical Society and the Etobicoke community.

The commissioned artist(s) will work closely with the City’s Economic Development and Culture Division and the Parks Forestry & Recreation Division, and other partners to develop the art, confirm siting, and install and complete the project.

Funding for the project has been secured in the amount of $50,000.00 (+HST). Budget includes all artist fees, materials, fabrication, installation, transportation, insurance and permit fees.

Further information about the project, and complete submission requirements and instructions are detailed in the TERMS OF REFERENCE, available: HERE.