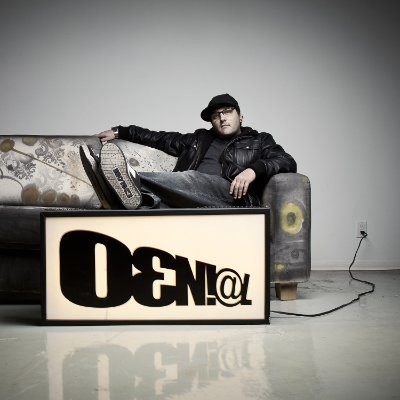 aerosol and stencil artworks critique contemporary politics, capitalism, consumerism and the human condition under the artist’s pseudonym and alter ego DENIAL. His artistic career began in 1999 during his involvement in the graffiti and street art movement. DENIAL’ studio is based in the border city of Windsor, Ontario, Canada next to Detroit, Michigan and spends much of the year travelling, painting murals, and exhibiting throughout North America and internationally. DENIAL is very active in painting large scale murals and street art which often depict bold, bright, subversive pop inspired imagery intended to stun the viewer into contemplating the deeper meaning of its content and meaning.

In 1999, Daniel adopted the moniker ‘DENIAL’ as a means of poking fun at advertising, politics and media messages that contemporary society is often ‘in denial’ about. Intended as a conceptual means of marketing absurdism, DENIAL also challenges traditional notions of graffiti and public art through his dynamic and often satirical visual subversions. A self-described subversive punk-pop artist, DENIAL’ works challenge the comfortably numb consumer masses by holding up a mirror up to the viewer using comedic artistic expression, wit and provoking imagery in a unique, unforgettable aesthetic.

During his breakout session, Daniel plans to talk about how and why he became an artist in Windsor along with the kind of art he does. He will then show the students his process in the type of art he does by bringing a 5 colour stencil painting and create art in front of his audience.