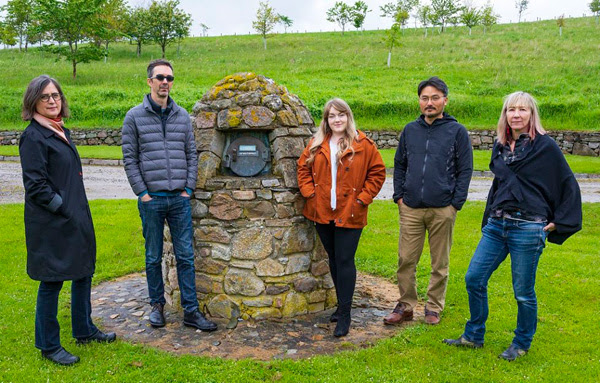 Glenfiddich® Single Malt Whisky is inviting artists living and working in Canada to enter the internationally renowned competition for the prestigious 2020 Glenfiddich® Artists in Residence Prize. The Canadian winner will be one of eight artists worldwide to be awarded the coveted prize to live and work at the Glenfiddich Distillery in the beautiful Scottish Highlands.

Valued at over $20,000, the prize covers the cost of travel, accommodation, living expenses and materials during the three-month stay in the summer of 2020. The experience provides a unique opportunity for artists to produce an ambitious body of work and to share in a dialogue with artists from around the world, fostering cross-disciplinary ideas.

“The Glenfiddich Artists in Residence program doesn’t set any parameters on what our artists can produce,” said Glenfiddich® Artists in Residence program curator Andy Fairgrieve, in a recent interview. “Each year, a number of artists from around the world are selected to take up a residency at the distillery and are invited to take inspiration from their surroundings to produce new work. It has become widely acclaimed in the art world for providing artists with an original setting, space and community in which to work.”

Former Artist Residents frequently note the fertile setting and famed highland hospitality: “It was unlike anything I’ve ever experienced,” remembers Dave Dyment, the 2008 Canadian artist winner, who now administers the jury process. “I remember arriving to find three bottles waiting on the kitchen table of my beautiful croft: twelve, fifteen and eighteen year old single malt Scotch. And in the refrigerator: Canadian cheese!”

The distinguished jury also includes Michelle Jacques, Chief Curator at the Art Gallery of Greater Victoria; Emily Falvey, Director/Curator of the Owens Art Gallery; Michelle Schultz, Executive Director of Latitude 53; Stefan Hancherow, Associate Art Curator for RBC; Collin Zipp, the director of Platform; and Ivan Jurakic, Director of the University of Waterloo Art Gallery. They select from over 200 submissions each year and create a list of ten finalists. From this shortlist, Fairgrieve selects the winner based on the inventiveness of their proposal, the strength of their previous work and their compatibility with the other participating artists.

Visual artists of all disciplines are invited to apply for the residency, which in the preceding 18 years has hosted painters, sculptors, filmmakers, illustrators, animators, photographers, and performance artists.

Last summer Canadian artists Marla Hlady and Christof Migone produced a series of sound works, including Swan Song, which turned the swan neck sections of retired stills from the distillery (removed through the roof by a crane) into gramophone horns. These were then used to play back recordings they had made throughout the distillery and of The Doric Dozen—a choir of voices constituted of distillery staff. Each one volunteered to contribute two short voice recordings, one the highest pitched sound they could produce, and one the lowest.

Describing their time in Dufftown as “extraordinary” and “life-changing”, the artists remarked that “the residency gave us ample time to develop our ideas, which is another way of saying: we got stuck plenty trying to concretize them, we kept trying, this led us to more ideas, more attempts, and several sidelines and spillovers. The incomparable surroundings and Andy’s indispensable aid enabled us to meet the challenges this exploratory process engendered in a productive and generative way.”

The Canadian Artist in Residence winner will be announced in March 2020.

For more information and to apply please visit www.glenfiddich.com/ca/artistsinresidence

William Grant & Sons is an independent family-owned distiller founded by William Grant in 1887 and today still controlled by the fifth generation of his family. Named ‘IWSC Distiller of the Year’ in 2012 for the fifth consecutive year, William Grant & Sons distils some of the world’s leading brands of Scotch whisky, including the world’s favourite single malt Glenfiddich®, the handcrafted range of The Balvenie® single malts and one of the world’s best loved blended Scotches, Grant’s®, as well as selected other spirits, including Hendrick’s® Gin, and Sailor Jerry® Spiced Rum and Tullamore Dew®.