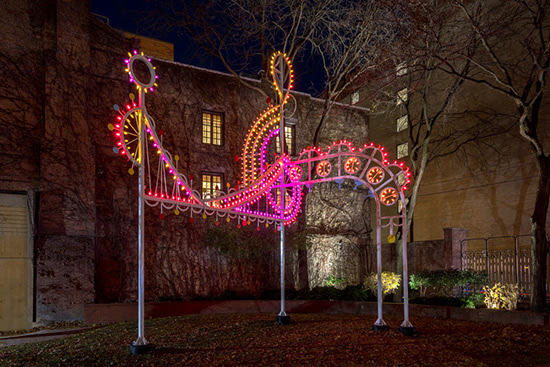 From its opening in 1981, the Toronto Sculpture Garden (TSG) commissioned temporary artworks by over 80 artists, in a small City of Toronto park opposite St. James Cathedral on King Street east. Until 2014, it was operated as a partnership between the City of Toronto and the Louis L. Odette family, whose non-profit L.L.O. Sculpture Garden Foundation funded and administered the exhibitions. Under the direction of Rina Greer, the TSG provided artists with the opportunity to work experimentally in public space, explore issues of scale and materials, and engage with the local community as well as visitors to the neighbourhood. For some, the expansion of their practice beyond the studio led to major public artworks elsewhere.

The Fall 2019 Sculpture Garden project will be presented in partnership with the inaugural Toronto Biennial of Art, which will take place along the waterfront and in other parts of the city from September 21 to December 1, 2019. The work for the Sculpture Garden will be connected thematically and practically with other artworks in the Biennial exhibitions.

The Biennial will feature works by Canadian and international artists in public spaces and unexpected locations. Many projects will be presented in collaboration with not-for-profit galleries, museums, community organizations, and educational institutions across the city.

The curators for the 2019 Toronto Biennial of Art ask artists to consider “how can we be in relation?” This question is intended to decenter the individual in place of a multiplicity. What is our role when we imagine our position amidst an infinite constellation of beings, human and non-human, animate and inanimate? And might this be a future? The future’s future? By focusing on relations, kinships, and interdependencies, we open ourselves up to ancient ideas, alternative histories, sacred belief systems, and ways of knowing. We also look further back, towards a deeper, geological sense of time. Measured in eons, not centuries. And by recalibrating the compass by which we view the past, we also direct our gaze to a multiplicity of futures: Indigenous futurisms, Black futurisms, migrant futurisms, animal futurisms.

The Biennial will take place primarily within an area framed by the original boundaries of the so-called Toronto Purchase (1805), which ran from Ashbridges Bay to Etobicoke Creek. For the First Peoples, who have maintained a presence here for over 15,000 years, this is a site of spiritual healing, trade, treaty, and gathering. In the current era, it has been deeply inscribed by much newer settler, slave and immigrant narratives, just as it has also been physically transformed by industrial, military and civilian use. In years to come, this line will be redrawn again by radical development and re-naturalization. Existing on the edge of Lake Ontario, part of the largest freshwater system on Earth, we view it in relation. And at each new magnification we get a different view of our role in a multitude of ecosystems: collaborative and destructive, ecological and capitalistic, civic and colonial.

The successful proposal will be selected by the TSG Selection Panel, which will include a member of the Biennial curatorial team. Preference will be given to new work that responds to the site and the curatorial direction; only in exceptional cases will existing work be considered.