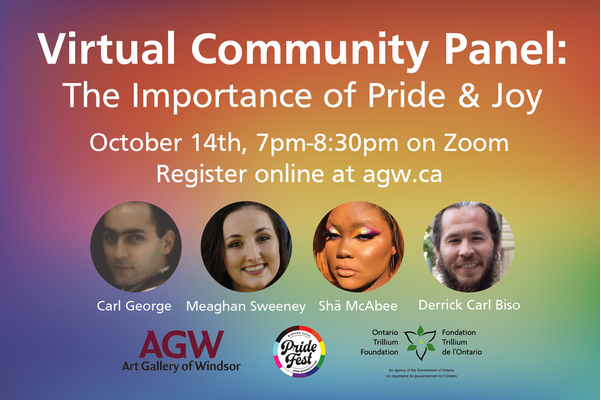 This even is free to attend. Registration is required, register here

Join Derrick Carl Biso, Special Initiative Coordinator and organizer of the Pride & Joy Community Exhibition, and some of the featured artists for a Virtual Community Panel. Our conversation will focus both on the artist’s works and the community here in the region. We will discuss the importance of Pride & Joy, what that means to us, and what we hope for our shared future.

This program is presented by the Art Gallery of Windsor in partnership with Windsor-Essex Pride Fest and is funded by the Ontario Trillium Foundation.

Carl George is an artist and activist working in experimental film, painting, and collage. He is a founding member of the non-profit art collective Allied Productions and has curated exhibitions in venues such as The Armand Hammer Museum, The Film Society of Lincoln Center, The New York Department of Cultural Affairs, Participant, Inc., The Kinsey Institute, Warner Brothers and Paramount Studios Hollywood, and Cinecitta Studios, Rome.

Many of his short experimental films have been shown in festivals internationally and are in the permanent collections of the Museum of Modern Art, the Whitney, the Guggenheim Museum, and the New York Public Library. His 1986 short film, The Lost 40 Days has been digitized with the assistance of the National Film Preservation Foundation and is now in the permanent collections of the National Film Archive at the Library of Congress and Anthology Film Archives in New York.

His 1989 film DHPG Mon Amour, documenting the radical advances made by people with AIDS in developing their own health care, is a classic of AIDS activist filmmaking and was recently incorporated into the Oscar-nominated documentary How to Survive a Plague (2012).

Meaghan Sweeney (She/They) is a contemporary mixed media artist based in Windsor-Essex. Their work is an introspective exploration of self, analyzing themes of values, personal philosophy, identity, and mental illness. Sweeney’s process primarily emphasizes experimentation and curiosity to create work meant to be felt by the viewer but obscure representationally. Each material used in their practice is an expression of the complexity of the human experience. Sweeney received their BFA in Fine Arts at the University of Windsor in 2021 and received a Beaux-Arts certificate from Collège Boréal in 2016. They are the Vice President of ACWR’s Vanguard Youth Arts Collective. They have participated in Windsor Zine Fair (2018), TARTS Festival (2017 and 2018), the group exhibition Urban Interruptions at SoCa Gallery (2019), Windsor Essex for Youth fundraiser (2020), and the group exhibition Place of Healing at Artspeak Gallery (2021). Sweeney is passionate about engaging the community through the arts, and they often do commission work.

Shä “xMUovAx” McAbee is a 29 year old nonbinary trans beauty influencer. Being an influencer and marketable to brands is hard when you’re fat black and queer, often used for otherness and diversity campaigns. I’ve aimed my goal at opening the doors in the beauty community to queer people of colour, specifically non androgynous queer folx and our misgendering or lack of validity in beauty and queerness, my drive to improve that in our society for the future of beauty lovers alike.

Mx. Derrick Carl Biso (they/them/theirs) works at the Art Gallery of Windsor as the Special Initiatives Coordinator. They are a queer non-binary White settler with European ancestry, born and raised in the territory of the Abegweit Mi’kmaq First Nation, also known as Prince Edward Island. They labour as a designer, artist, educator, and philosopher living in Windsor, Ontario – the territory of the Anishnaabe, and the Three Fires Confederacy comprised of the Ojibway, Odawa and Potawatomi Nations. Derrick Carl’s artistic practice and research is currently focused on identity, relationships, responsibility, ethics, the erotic, history, myths, anti-racism, reconciliation and conscientization. They graduated from the University of Prince Edward Island with a Bachelor of Arts in Philosophy and Diversity and Social Justice Studies and studied Graphic Design at Holland College. They are studying Psychology & Visual Arts at the University of Windsor and live with their wife, Janet, and cat, Eleanor.