We are Not a Phase: Black & Indigenous Solidarity

Overview – We are Not a Phase: Indigenous Screening Series + Talks

In partnership with Turtle Island Aboriginal Education Centre | University of Windsor, St. Clair College Indigenous Student Services, VUCAVU and Arts Council Windsor & Region proudly present: We are Not a Phase: Indigenous Screening Series + Talks. This is the fourth collaboration between ACWR and the Turtle Island Aboriginal Education Centre to engage and gather the University community and those outside to experience film and discussions reflecting on Indigeneity and to honour community initiatives that are Indigenous led. This year we are proud to welcome St. Clair College and VUCAVU as collaborators with support from the National Film Board of Canada.

We are Not a Phase: Indigenous Screening Series + Talks are a series of four separate short programs that showcase a variety of film genres by primarily Indigenous Directors from across Turtle Island. The organizers assert that in this time what comes to mind is the connection to the land and the responsibility to the past and future generations. The films are grounded in the concerns of communities, pride, resiliency and memory. The discussion will involve community members with special guests who will be able to speak from their own perspective and worldview. The goal is to build relationships within the communities we occupy and to celebrate the artists who imagine a better future for their people.

About: Kat Pasquach, Aboriginal Outreach and Retention Coordinator, Aboriginal Education Centre will host a discussion on Black & Indigenous solidarity exploring the topics of kinship and relocation. Students, Staff and Faculty from the University of Windsor and St. Clair College are encouraged to attend. 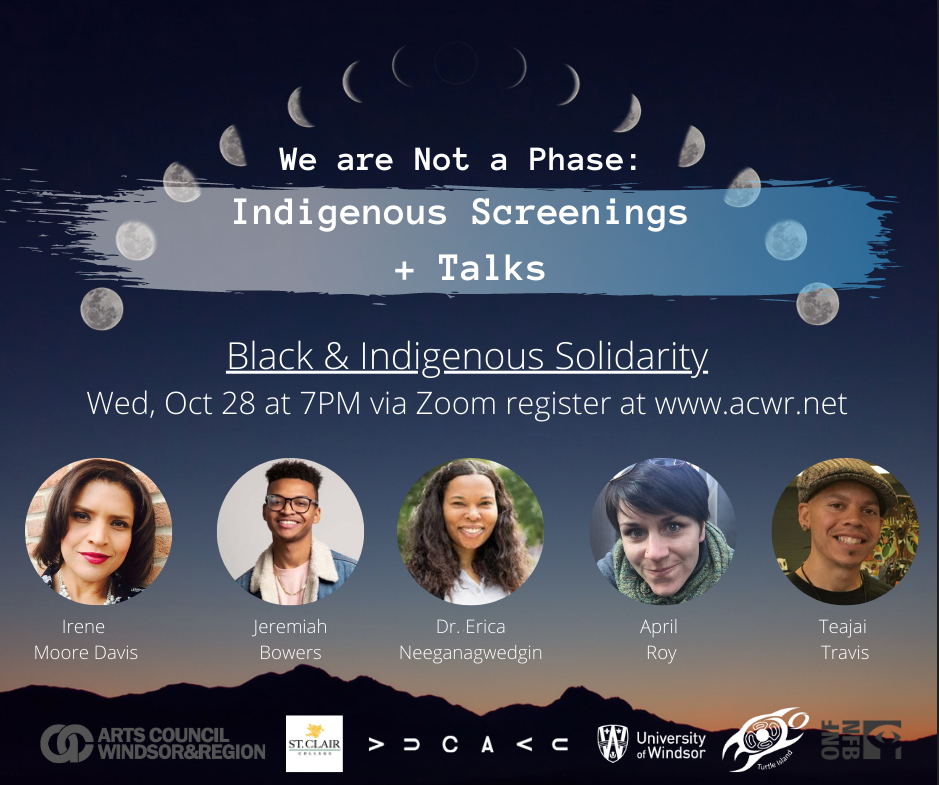 Erica Neeganagwedgin (Taino) is an assistant professor in Critical policy Equity and Leadership Studies at Western University with a specialization in Indigenous Education.

teajai (he/him) is an Afro-Indigenous Artist/Activist born and bred in close proximity to the fluid frontier, in colonized Waawiyaataanong, the traditional lands of First Nations people. He has a curiosity for human behavior and the ways in which people of colour navigate institutional systems of oppression, while having to exist in a vacuum of euro-colonialism and white supremacy. Through his art, teajai is sharing the stories of silent tongues, while also observing, critiquing and engaging with institutional injustice by inserting himself into predominantly white spaces.

As the Chair of the National Black Students’ Caucus, an arm of the Canadian Federation of Students representing over half a million students from coast to coast, his advocacy work is centred around Black liberation, dismantling racial inequities, youth empowerment, and student leadership development.

He recently ended three terms as the youngest President of the University of Windsor Students’ Alliance. In his role, he negotiated a permanent student transit pass for the University of Windsor students and helped to form equity collectives on campus, which serve as safe(r) spaces for BIPOC and other marginalized students to find community and develop strategies to combat institutional oppression.

Ultimately, Jeremiah’s goal is to build towards a world free from racism, colonial systems of power, oppression, and inequity. Through his work, he hopes to create a safer and positive future where youth, as well as all Black and Indigenous peoples, feel empowered to reimagine and pursue the endless possibilities for themselves.

Born and raised in Windsor, Ontario, Irene Moore Davis is an educator, historian, author, and activist who enjoys speaking about equity, diversity, and African Canadian history to a wide variety of audiences. She fulfills a variety of community roles including President of the Essex County Black Historical Research Society, Co-Chair of Black Women of Forward Action, founding member of the Windsor-Essex Diversity and Inclusion Task Force, Programming Chair at BookFest Windsor, and co-host of the All Write in Sin City podcast. Irene’s forthcoming book is titled Our Own Two Hands: A History of Black Lives in Windsor from the 1700s Forward. A graduate of the University of Windsor, Queen’s University, and Western University, Irene is an administrator at St. Clair College, where she also teaches English and history.

April Roy (B.A. Hons., B.Ed.) has been teaching secondary English for over 15 years. She is a passionate educator, learner, and human rights activist. She was raised in a French-Catholic family and understands her connections to colonization and her role in decolonizing spaces of which she’s in charge. She works to be an agent for positive change and understanding, and to have courageous conversations about race. She challenges the thinking of people in her life who have a difficult time understanding intersectionality. She’s always working on being a better ally creating safe spaces for marginalized and racialized individuals.

To watch the films for free during this time, please log into your Free or Rental account or sign up for one here. Once you have logged on to the VUCAVU platform, please click on the video directly from this curated program page in order to watch it for free during the program period.

“Having two identities can be hard in a world where one or the other is never enough…” – Gaelle Mollen, PINATAKUSHKUESS

The featured films in this program series honour the distinct histories of both Black & Indigenous peoples, and those whose identities intersect across culture and heritage. This programming arises as a response to this place, known as Windsor ON; the oldest continually inhabited settlement in Ontario Canada. This land is marked by thousands of years of underrepresented Black and Indigenous history.

What we understand as Canadian history, is a history that has left out the perspectives of the Haudenosaunee, Lunaapeew, Anishinaabe, Black/African/Carribean and Slave Descendant peoples – including many other peoples (newcomer, and the like) that have a continued presence on this land: what is Black/Indigenous Solidarity and why is it important?

Underrepresented histories are a systematic erasure of difference – collectively, where and how do we hold space for these distinct identities? Where do we find belonging and difference in their intersections? The films presented as part of this series recontextualize (by means of being presented together) a longing for space and representation, and the methodologies of preserving IBPOC history and lived experiences.

The filmmakers in this program share their experiences and cultural knowledge and in doing so honour their familial history, identity, and communities. The films culturally resonate, in terms of Black & Indigenous Solidarity, through a meaningful reflection of historic injustices as a result of western colonialist structures; as are represented in  governing institutions. In current times and in the future, we encourage and participate in supporting Black & Indigenous cultural production, and activism: listening is an act of respect, creating space is a mandatory action, and unlearning is an ongoing commitment to reconciliation and justice.

Talysha Bujold-Abu (she/her) is an artist, illustrator and arts educator – with a Masters of Fine Arts (MFA) from the University of Windsor (2018). Of recent, I have participated as an artist in residence with ArtsPond, Toronto ON (2020), the Black Creators Series/Discussion with the Art Gallery or Windsor, Windsor ON (2020), and a completed publication with Intermediality – History and Theory of the Arts, Literature and Technologies (Number 34, Fall 2019), Montreal QC.

Julie Rae Tucker (she/her) is the Director of Public Programs & Advocacy at the Arts council Windsor & Region. She is a  Windsor-based artist, independent curator, and cultural worker. Tucker, earned her BFA from Nova Scotia College of Art and Design and MFA from  the University of Windsor. She is  Lunaapeewi from the Munsee Delaware First Nation and is of settler descent.

ACWR would like to thank the Government of Canada’s Emergency Community Support Fund and Community Foundations of Canada for their support of the Black & Indigenous Solidarity Screening.