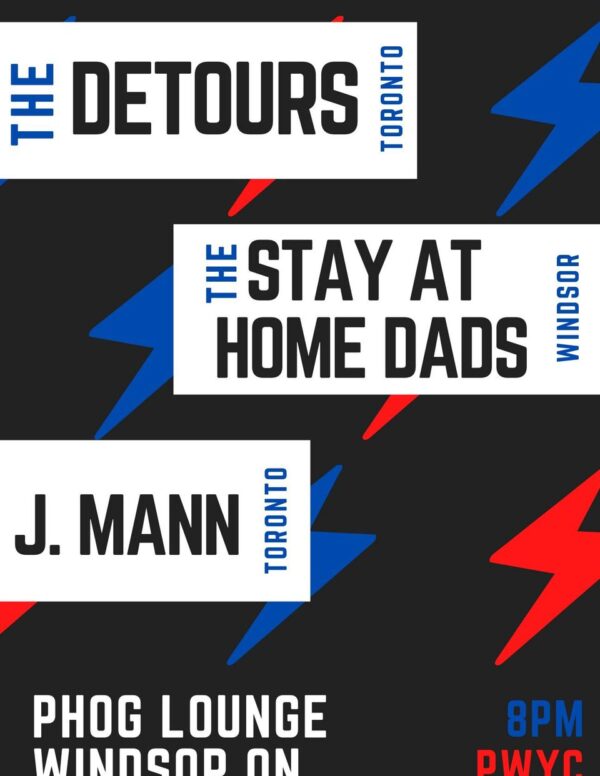 The Detours – The Stay At Home Dads – J. Mann: Live at the Phog Lounge

The Detours (Toronto) and the Stay at Home Dads (Windsor) on Sat, July 30th at the Phog Lounge: https://fb.me/e/1GM0K7YMv
Earlier this year, J Mann released an album “Take the Wheel”
Bio & EPK:
J. Mann’s latest album Take the Wheel takes cues from the cinema, ranging from classic films like Bicycle Thieves all the way through to more recent flicks such as the Argentinean film Juntos para Siempre (Together Forever).  Why cinema?  J. Mann explains:

“Each past release has been loosely based on some art form; the last album Ten Animals (2018) was a nod to paintings, How to be an Ambivalent Negotiator (2007) to books and Too Much Theatre (2005) to drama.”

The biggest difference is that this time, he actually set out to write a screenplay first:
“If you want a circuitous route to write an album, I highly suggest writing a movie script first!  At the end of it, I thought, ‘well, now this script needs a soundtrack.’”
Writing a Soundtrack for a Screenplay  The “soundtrack” comes to us in the form of the album Take the Wheel, an eight-song offering that thematically echoes the spirit of the road trip.  While some songs on the album directly reference movies such as “Deleted Scenes” and “Money, Not Love” (based on a real-life robbery that was later turned into the motion picture El Robo del Siglo (The Heist of the Century)), others offer punchy accompaniment to a drive such as the bleary-eyed technological romp “A.I.” and the mellow-meets-intense “Wheels Spinning”. J. Mann ponders the individual and the collective in the song “Peloton” and explores the idea of covering expansive distances – virtually or otherwise – in the album’s closer “I See Clearly (When I’m in Range).”  Four of the songs lyrics were co-written with UK-based poet and frequent collaborator Nasser Hussain.

Electrified International Road Trip Musically, the album is far more electric than past releases interspersing 80s inspired guitars (read: lush Chorus pedals) complete with electronic burbles, warbles and beeps.  Prominent drum beats and rhythms are central to the album and were divvied up between the awe-inspiring talents of Cam de Laat and Don Kerr. The album takes us on international routes stretching continents as Barcelona-based, Diego Mateu, added wall-of-sound guitars, organs and a wide array of electronic graces to a couple of tracks while Buenos Aires-based Emiliano Jelicié sweetened sounds with rhythmic keyboards on “Peloton”.  Back in Toronto, guest musicians Patrick Tevlin provided a reverb-soaked trumpet on “A.I.”, Paul Linklater a face-melting guitar solo on “Money, Not Love” and Luisa Colnago a conversational set of vocals on “Down (Here) & Out (Side)”.

The album was co-produced with long-time collaborator and Grammy-award winning engineer, Inaam Haq, marking 25 years that Haq and J. Mann have made music together. In addition to mixing and mastering, Haq laid down thumping basses not to mention additional guitars, electronic sounds and a few reinforcing vocals.

The album’s first single is “Junk Drawer” (Aug 31, 2021) accompanied by a video directed by Liliane Arizmendi in which J. Mann negotiates the streets of Toronto with an actual junk drawer strapped to his shoulders.  The album’s second single is “Down (Here) & Out (Side)” (Nov 22, 2021) accompanied by a video filmed with GoPro action scenes on a vintage Pinarello bicycle.