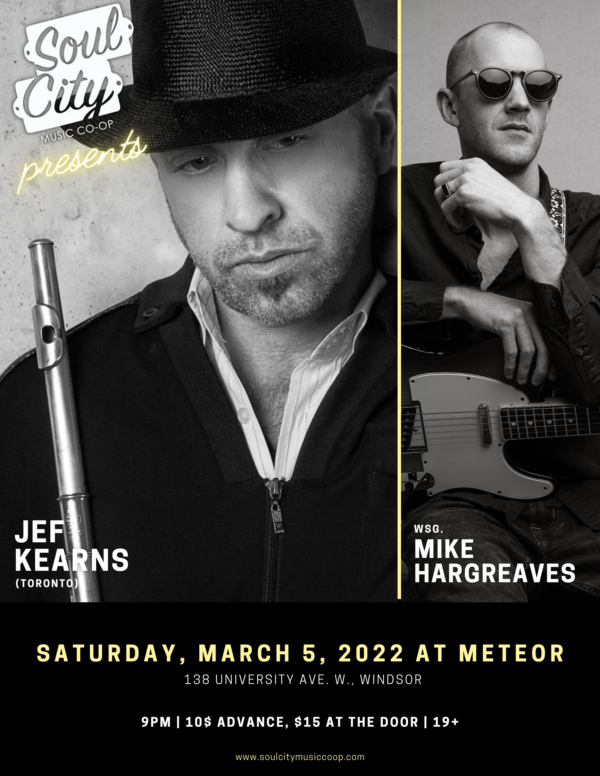 Admission $10 advance, $15 at the door
Advance tickets available on Eventbrite at http://soulcitymusiccoop.eventbrite.ca

Amazon best-selling Canadian solo artist Jef Kearns is transforming the flute from a background instrument to a serious soul voice in R&B and hip-hop.

Kearns first picked up the flute when he was ten years old, and living in southwestern Ontario. Although he studied with traditional jazz and classical teachers, he loved playing along with R&B and hip-hop stations broadcasting from Detroit. His goal, even from an early age, was to create a distinct and instantly identifiable flute sound with enough presence to command attention—just like an R&B singer’s voice.

Kearns, who says he saves his breath for the music, tells stories through his flute, like he would if he were singing or speaking. His flute is his voice. “For me the flute is an important instrument that has something to say,” he says. “Instead of grandstanding with how many notes I can play and how fast, the songs I write have an accessible melody and story arc that audiences can follow and connect with.”

What he has to say, together with his signature soul sound, is resonating with international audiences who listen to R&B, quiet storm and hip-hop music. Over his two decades as a professional musician, he’s built what would be considered an impressive online following for any independent artist. For a solo flute player it’s unprecedented.

MIKE HARGREAVES
Born and raised a riverbank away from the birthplace of Motown, prolific Canadian singer-songwriter Mike Hargreaves has a lifetime of immersion in classic soul and R&B music. With over a decade of experience crafting and performing intelligent, compelling songs, Mike continues to re-define the sound of Canadian independent music.
mikehargreaves.com

LISHA RACQUELLE
With soft, sweet vocals and stories that tug at the heart, Lisha Racquelle’s gift is truly heaven sent. Her faith-infused lyrical R&B is the natural progression of a lifetime of studying music, from childhood lessons, to being a vocal major in high school, to moving out of Brampton to study music at the University of Windsor. Her debut EP is set to be released later in 2022.
www.lisharacquellemusic.com