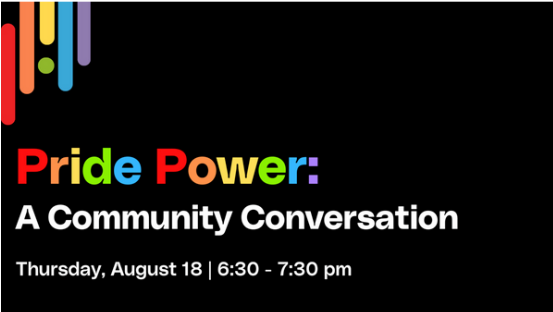 From 6:30 – 7:30 pm, join moderator Craig Pearson and panelists Derrick Carl Biso, Walter Cassidy and Rachel Pieters on the third floor of AWE for “Pride Power: A Community Conversation.” This conversation is part of AWE at Night: Pride Edition. We encourage guests to familiarize themselves with AWE’s Code of Conduct prior to joining this event.

Mx. Derrick Carl Biso uses they/them/their pronouns exclusively. They labour as an artist, community organizer, educator, and graphic designer. Derrick Carl is influenced by their experiences as a queer and nonbinary person from rural Prince Edward Island, their education in Philosophy and Diversity and Social Justice Studies from UPEI, and more recently from labouring and organizing in downtown Windsor, Ontario. They are particularly interested in aspects of human identity, expressions of creativity and culture, relationships and responsibilities, ethics, the erotic, history,
conscientization, and the natural world. Derrick Carl recognizes that our liberation from oppression is a shared struggle that requires solidarity across identity categories. Derrick Carl is currently employed as the Program Administrator and Facilitator with the QLink Windsor-Essex collaborative.

Walter Cassidy has been a high school teacher for the last 22 years. He has been the teacher sponsor of the first GSA for the GECDSB since 2009. He is the founder and Chair of the GSA for Staff. He wrote and teach the AQ course for the University of Windsor: How to Teach LGBTQ Students. Walter is the Chair of the WERA (Windsor/Essex Rainbow Alliance) which is working to preserve 2SLGBTQAI history in this area as well as working with the city on a Pride Plaza that would give the community a permanent meeting place with historical connections. He has recently been published on various local 2SLGBTQAI historical moments including a local timeline going back to 1842. Walter also created an online resource for educators in the public board entitled: Pride in Education. He currently has an exhibit at the Chimczuk Museum. He hopes to finish a book soon.

Rachel Pieters
I’m a Contemporary Realist artist, often exploring different mediums, though I work mainly in oils and pencil. I chased the elusive mastery of my artistic abilities from the time I was a young child until I completed high school, putting it aside for twenty-three years after a decision to pursue graphic design and writing. I was gifted my grandfather’s paints and brushes in 2018 and began the chase again. Since then, my artwork has been exhibited in many gallery shows, has been collected by both international and important collectors, and is headed to the moon in a time capsule in 2023. I’m highly influenced by the various moods, textures, and themes conjured by stories, music, and fashion, as well as by historical masters like Rembrandt, Degas, Munch, Klimt, and The Wyeths, and by contemporary masters like Bo Bartlett, Kehinde Wiley, and Margaret Bowland.

Craig Pearson is the managing editor of the Windsor Star and a long-time daily journalist and educator. He has worked as a journalist for 35 years — at the Sherbrooke Record, the Montreal Daily News, and for the last 31 years, the Windsor Star. The Montreal native has covered arts and entertainment and city hall and everything in between, served as a war correspondent in Afghanistan, and has won numerous awards, including as a co-winner of the National Newspaper Award Citation of Merit for the Windsor Star’s 2014 gun-running series. He has a college diploma in social sciences, a bachelor’s degree in journalism and a master’s degree in communication studies. He has taught journalism part-time at the University of Windsor for 22 years, and is the author of two From the Vault history books based on Windsor Star photos. He has hosted many community events, including live televised election debates, and has moderated various panel discussions. He also serves as the chair of the St. Clair College Journalism Public Advisory Committee. He is married with one son — and remains active in the community.