Mx. Derrick Carl Biso uses they/them/their pronouns exclusively. They labour as an artist,
community organizer, educator, and graphic designer. Derrick Carl is influenced by their
experiences as a queer and nonbinary person from rural Prince Edward Island, their education
in Philosophy and Diversity and Social Justice Studies from UPEI, and more recently from
labouring and organizing in downtown Windsor, Ontario. They are particularly interested in

“We should fight hate and the dissemination of ignorance and fear with the effective use of history and fact. Ideology cannot stand it when we make connections.”
Felix Gonzalez-Torres1

“It’s hard to have collective memory when so many who were “there” are not “here” to say what happened.”
Sarah Schulman2

The intent of this text-based installation is to highlight the undeniable presence of 2SLGBTQIA+ people in our past, present, and future. Although the words we use to describe ourselves may be different, our shared experience of being queer can unite us. We have a lineage of those who came before, and so many who are still ever yet to come.

The content of this installation is drawn from the research done by local educator Walter Cassidy and the regional timeline of 2SLGBTQIA+ history that is published on the Windsor-Essex Pride Fest website. To learn more about each date that was included, and many more, visit https://www.wepridefest.com/wehistorytimeline/

The format of the content is inspired by Felix Gonzalez-Torres and his photostats series. As an homage to the artist, this billboard provides a suggestive list of references, naming layers of history, which we may remember or forget.

PRIVATE 1842 refers to what is referred to as Canada’s first documented conviction of “homosexual sex between two consenting adults”. Both are assumed to have been stationed with the regiment at Fort Malden at this time. They were tried and convicted in the Sandwich town court. The text from the Western Harold issue of August 12th, 1842 reads “Samuel Moore and Patrick Kelly, Sodomy, to be executed on 15th day of July next”. Their sentence was changed to life in prison, and both men were released prior to their deaths.

I thought this date was an important place to start because the history of moralizing and criminalization of sexual relations, gender identity, and gender expression that has been experienced by the 2SLGBTQIA+ community is linked directly to the colonization by European militaries and monarchies. Prior to colonization, many Indigenous Nations included and honoured sexual and gender diversity – including having special names and roles.

ETNA’S 1964 refers to the first bathhouse raid that happened in Canada, at Etna’s Steam Bath on Brant Street in Windsor. The raid resulted in nine men, Canadians and Americans, being charged as ‘found-ins’. The owner was charged with keeping a bawdy house and was sentenced to a year in prison. The raid did not result in the closure of the bathhouse, it remained in operation under a new name, Vesuvio, until 2009.

The date was chosen as it is representational of the criminalization of sex and sexuality, and police violence targeting the 2SLGBTQ+ community in Canada. Police raids on bathhouses number at least 38 between the period of 1968-2004 according to Historian Tom Hooper. And these raids are only one example of how police and state institutions, like the court and prison systems, have oppressed 2SLGBTQIA+ peoples. The story of Etna’s Steam Bath, and its successor Vesuvio, is important as it speaks to the resilience and pride of 2SLGBTQIA+ community members in the face of state violence and oppression.

GAY DANCE 1973 refers to the story of how the local newspaper, the Windsor Star, rejected and refused to publish an ad from the group Windsor Gay Unity to advertise their dance. The dance was organized locally as part of a national Pride Week event in Canada. The ad read, “gay dance FRIDAY FEB.9 8:30 P.M. ALUMNI LOUNGE UNIVERSITY CENTRE U. of WINDSOR”. The group, WGU, challenged the decision successfully, but the Windsor Star continued to refuse to publish the ads. The issue was not resolved until 1979.

This date was chosen as it speaks to the hostile social climate and bigotry that was much more commonplace during that time. As well as this story highlights the way that media, such as newspapers, are not neutral; that they are political. The story of the gay dance ad is important because it showcases dynamics of power, and how even when we are right justice may not come without our continued determination and pressure to make it happen.

JOHN 1977 refers to the first Gay Rights protest in Windsor. The protest was in support of John Damien, who had been fired by the Ontario Racing Commission because of his sexual orientation. He filed a wrongful dismissal suit and sought punitive damages. John Damien’s case was supported by Toronto Gay Alliance Toward Equality, the Coalition for Gay Rights in Ontario and other activists. His case was settled out of court, and his activism did help bring about the inclusion of Sexual Orientation in the Ontario Human Rights Code in 1986.

I chose this date to bring awareness to this important local story, and the people who helped bring about changes to provincial laws and Human Rights protections in Ontario based on sexual orientation. Windsor has a prominent place in the 2SLGBTQ+ history of the province, in particular because of the activism and organizing of the people here.

GET USED TO IT 1992 refers to the theme of the first Lesbian and Gay Pride Day. The celebration was held at J.B.’s Restaurant & Bar, and included a parade, dance, bar-b-que, dunk tank, volleyball, and a pageant. The event was hosted by Windsor Pride, which was founded that year. It was attended by a couple hundred people and did receive official declaration of support from Windsor City Council. J.B.’s Restaurant & Bar was located at 1880 Wyandotte St E, and is where the O’Maggio’s Kildare House is now.

This date was chosen for its natural importance as an inaugural year for both the organization Windsor Pride (which has since then developed into two separate entities – Windsor Pride Community and Windsor-Essex Pride Fest) and the Pride parade. It also is of importance as this year is the 30th anniversary of the Pride festival and parade. The festival has grown from being a small march of a couple hundred people to a weeklong celebration attracting thousands to people, with the continued aim of promoting equality and welcoming diversity in our community for the 2SLGBTQIA+ persons and people.

OUTSHINE 2017 refers to what was that year an International GSA Conference hosted in Windsor called OUTShine. OUTShine is a national Gay Straight Alliance conference created and hosted by Egale Canada. The conference brings together students, educations, and service providers to developing stronger GSAs, inclusion in schools, and celebrating 2SLGBTQ+ people and communities. When the event was hosted in Windsor in 2017, Americans from Detroit and the surrounding area were invited, as well as attendees from England, New Zealand, and Australia. The conference was attended by hundreds of students and educators.

I chose this date because it was a catalyst event for those who attended, I among them. Local organizations like Windsor Pride Community, Run for Rocky, and the Greater Essex County District School Board GSA for Staff worked with Egale to plan the conference. Local 2SLGBTQIA+ youth and our allies were recruited as Youth Ambassadors to serve as peer-leaders to help guide and support the students who attended. I met young 2SLGBTQIA+ people from across the country and around the world. Some fond memories include dancing in my red sequin dress as the room erupted to Lady Gaga’s anthem Born This Way, and singing along with the entire room to Queen’s Bohemian Rhapsody – lead by a chorus line of students from Walkerville Collegiate. Relationships were established here that have continued and grown since then. These sorts of engagements are so important for students and educators, and really everyone in our communities, to help build and develop welcoming and affirming communities for all 2SLGBTQIA+ persons and people.

LOOKING BACK LOOKING FORWARD 2022 refers to an exhibition of artworks on display at Art Windsor-Essex (former Art Gallery of Windsor) until September 2022. This exhibition has a regional focus of artists who lived and worked in Southern Ontario (from Toronto to Windsor) who are also identified as a member of 2SLGBTQIA+ community. Looking Back Looking Forward features artworks that are in the Collection of Art-Windsor Essex.

I chose this date because I want you to go see the exhibition. I curated Looking Back Looking Forward when I worked at Art Windsor-Essex as the Special Initiative Coordinator (2020-2021). The show includes works that have been made during the early part of the 20th century to the early part of the 21st century, and the range in style, techniques, and materials is indicative of the diversity and plurality of experiences of being 2SLGBTQIA+ in the region. Each artist’s life is full of stories that can help us better understand what the recent past was like for 2SLGBTQIA+ people. The exhibition also includes a hand-painted timeline by local artist Julia Hall, which also features important dates from the timeline published on the Windsor-Essex Pride Fest website and created by Walter Cassidy. I think it is so important that we know our history so we can better understand our present, and also help shape our future.
________________
1) Felix Gonzalez-Torres. 1990: L.A., The Gold Field
2)  Sarah Schulman. The Gentrification of the Mind 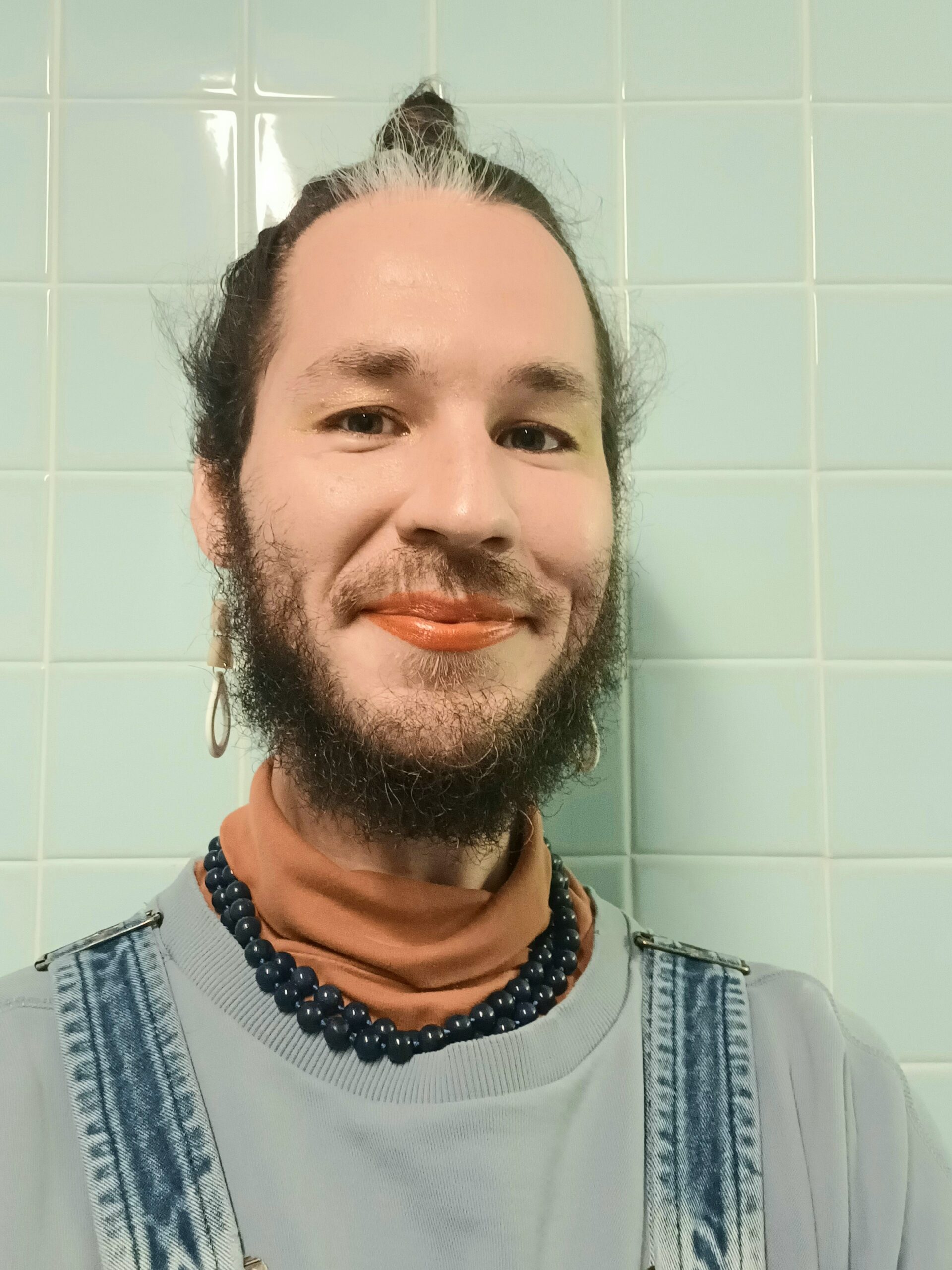 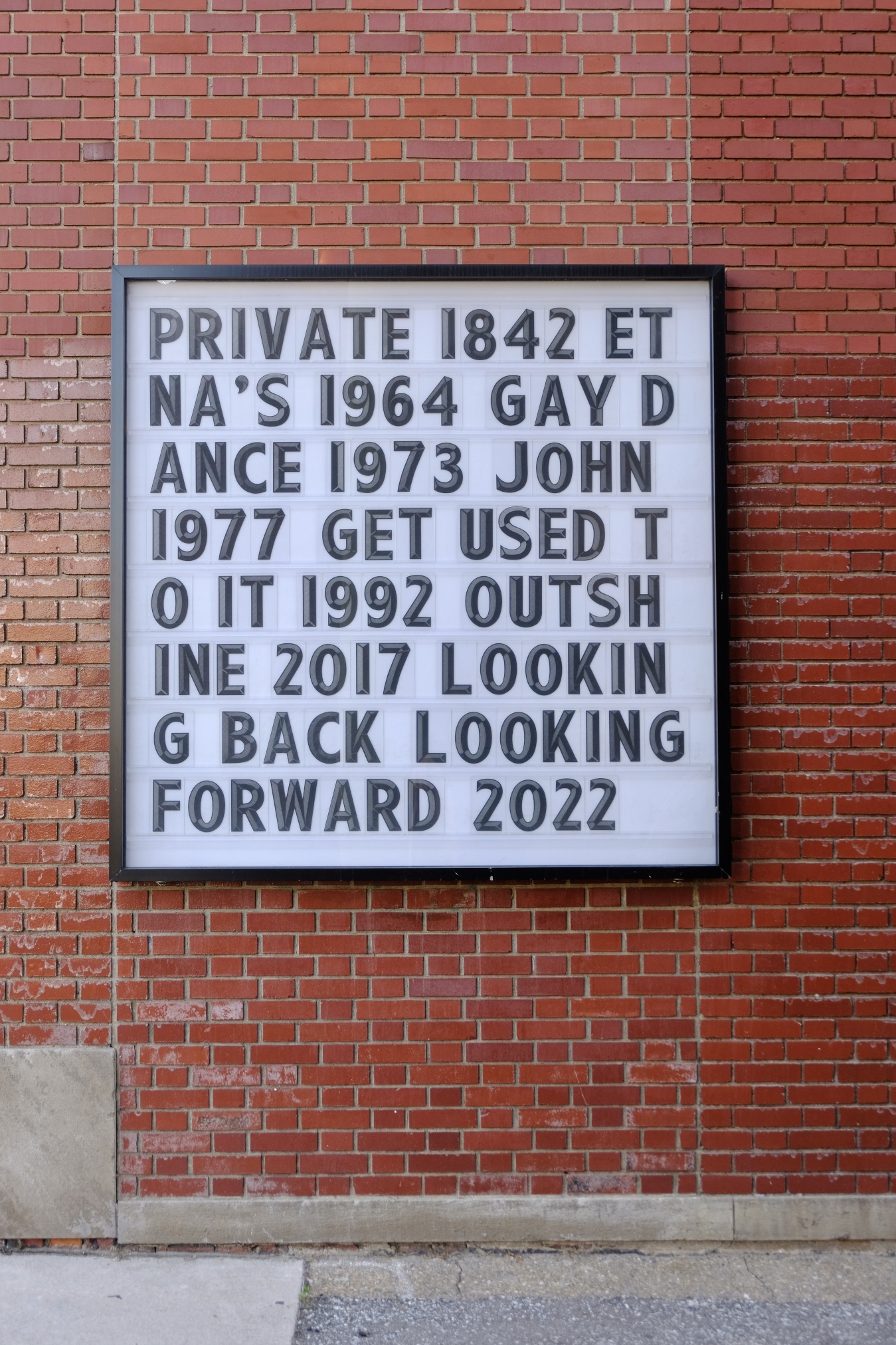