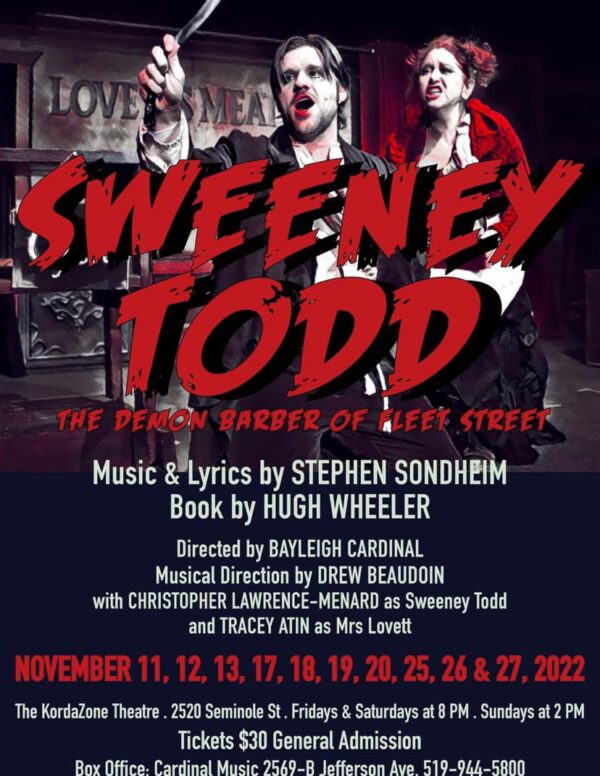 (Windsor, ON). Cardinal Music Productions and Korda Artistic Productions are thrilled to present an exciting new rendition of Sweeney Todd: The Demon Barber of Fleet Street from November 11 to 27, 2022 at The KordaZone Theatre.

Sweeney Todd has become a bloody, worldwide success since being awarded eight Tony Awards, including Best Musical, for its Broadway premiere. The show starred Len Cariou as Todd and the late Angela Lansbury as Mrs. Lovett. Stephen Sondheim’s and Hugh Wheeler’s tasty, thrilling, theatrical treat has simultaneously shocked, awed and delighted audiences around the world. Of the original Broadway production, The New York Times called the show, “… something close to a masterpiece, a work of extreme – I am tempted to say evil – genius.” The show has won multiple awards, in addition to its Tony’s, including the Lauren Olivier Award for Best New Musical. Since 1979 there have been several revivals in the West End, on Broadway, and elsewhere. In 2007, Tim Burton directed a film adaptation starring Johnny Depp as Todd, Helena Bonham Carter as Lovett, and the late Alan Rickman as Judge Turpin.

This is the infamous tale of Sweeney Todd, an unjustly exiled barber, who returns to nineteenth century London, seeking revenge against the lecherous judge who framed him and ravaged his young wife. The road to revenge leads Todd to Mrs. Lovett, a resourceful proprietess of a failing pie shop, above which Todd opens a new barber shop. Mrs. Lovett’s luck sharply shifts when Todd’s thirst for blood inspires the integration of an ingredient into her meat pies that has the people of London lining up… and the carnage has only just begun!

Media interviews, photos and interest is vital to local performing arts organizations, and we would love the opportunity to give you a sneak-peek and interview. To arrange an interview, set visit and photo, please contact Joe Cardinal at 519-944-5800 or email cardinalmusic@hotmail.com.

“We are excited to present this deliciously chilling tale, reimagined for the intimate setting of The KordaZone Theatre, where we hope the up-close experience will thrill audiences, and leave them on the edge of their seats. We have a magnificent cast and crew, and I am incredibly proud of this production.”
– Bayleigh Cardinal, Director

“This is one of the most haunting and beautiful stories and gifts that Sondheim and Broadway have ever given us. When I tackled the role of ‘Sweeney’ in 2015, the challenge was grand, the music was difficult to learn, and the experience of telling the story in front of sold-out crowds was pure magic. It’s an honour to be able to play this part again, five years later, and to be partnering up with Cardinal Music Productions again, and taking it back to the stage of the KordaZone Theatre. I’ve never viewed ‘Todd’ as a villain. Rather, I see him as this utterly destroyed creature who can achieve no solace and find no real comfort in the world he finds himself lost within. He is this sort of everyman that is left over after life goes terribly and tragically wrong. Family means everything to me, and in the journey of ‘Sweeney Todd’ I see what is possible when everything that matters is ripped away… how vengeance and anger can be all-consuming once real love is removed. ‘Todd’ is consumed by a rage that can only ever devastate and undo anything it touches, and that’s both challenging and compelling to portray. Getting to tackle all of this through gorgeous music, alongside a talented cast and crew, and playing opposite my beloved Tracey is more than anyone could ask for, really. I’m beyond grateful to Bayleigh and Joe for trusting me with this role. This is a return to the stage for me, after a five-year hiatus in which I took time to become a father to my son, and to write a book about losing my own father. This play, with its themes of the power of family, and the devastation of loss, has been a healing experience for me. I think there’s quite a bit for an audience to love, fear, relate to, and explore in this show.”
– Christopher Lawrence Menard, ‘Sweeney Todd’

“Ironically, what makes Mrs. Lovett such a delight to play is that she is a life force… funny, energetic, weirdly loveable. The songs! The lyrics! What a challenge and joy to perform them. Part of Sondheim’s genius is that his work is so complex, so ambivalent, so true! Mrs. Lovett seems to me to be the perfect capitalist: she’s got the ability to truly see herself as loving, generous, kind and at the same time profit from the horrors of Todd’s actions, which she has encouraged. She is sentimental and evil and wonderful! To be able to play Lovett with my dear brother Christopher as Todd is a dream come true! It’s engrossing and fun and powerful to team with him. I adore this show and I’m grateful to Cardinal Music Productions for making it happen. Big thanks to Bayeligh and Joe!”
– Tracey B. Atin, ‘Mrs. Lovett’