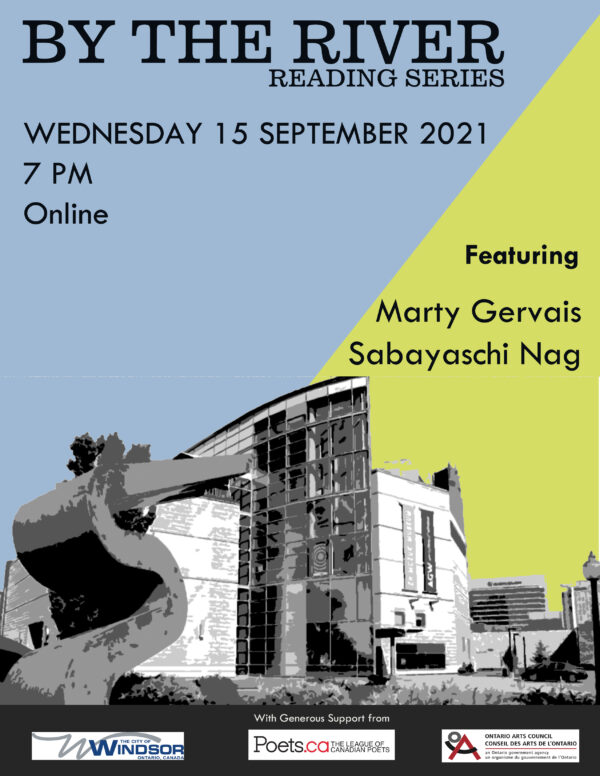 By the River Reading Series – Marty Gervais and Sabyasachi Nag

Marty Gervais is an award-winning journalist, poet, playwright, historian, photographer and editor. In 2011, he was nominated as the City of Windsor’s first Poet Laureate, and runs a Poet Laureate’s Blog. In 1998, he won the prestigious Toronto’s Harbourfront Festival Prize for his contributions to Canadian letters and to emerging writers. In 1996, he was awarded the Milton Acorn People’s Poetry Award for his book, Tearing Into A Summer Day. That book also was awarded the City of Windsor Mayor’s Award for literature. In 2003, Gervais was given City of Windsor Mayor’s Award for literature for To Be Now: Selected Poems.
As a writer, he has written more than a dozen books of poetry, two plays and a novel. His most successful work, The Rumrunners, a book about the Prohibition period was a Canadian bestseller in 1980 and was re-released in an expanded format in 2010 and was on the top ten Globe and Mail bestseller list for non-fiction titles. Another book, Seeds In The Wilderness (a collection of essays with Quarry Press/General Publishing) stemmed from interviews he conducted with such notable religious leaders as Mother Theresa, Bishop Desmond Tutu, Hans Kung and Terry Waite. With this latter book, Gervais photographed many of these world leaders. He is founder of Black Moss Press, one of Canada’s oldest literary publishing firms.

Sabyasachi Nag (Sachi) is the author of two previous collections of poetry: Bloodlines (Writers Workshop, 2006) and Could You Please, Please Stop Singing (Mosaic Press, 2015). His work has appeared, or is forthcoming in several anthologies and publications including Canadian Literature, Contemporary Verse 2, Grain, The Antigonish Review, The Dalhousie Review, The Maynard and Vallum among others. He is an alum of the Writer’s Studio at Simon Fraser University and the Community of Writers at Squaw Valley. He holds a graduate certificate in Creative Writing from the Humber School for Writers. He lives in Mississauga with his wife and son.