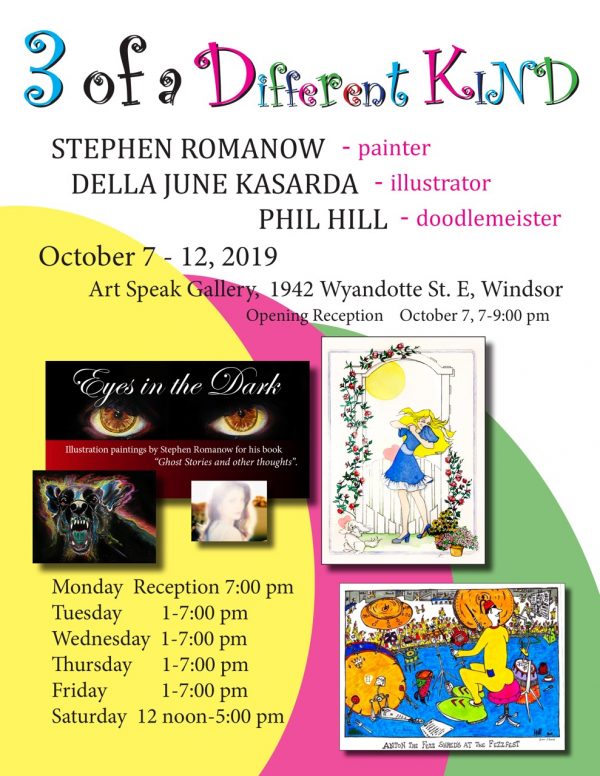 3 of a Different Kind

Stephen Romanow – Painter
Stephen was born in Saskatoon but grew up in Windsor. He obtained degrees in Visual Arts, Communication Studies and Education at the University of Windsor. He then moved to live in Toronto, Winnipeg and Edmonton. He worked as a teacher, arts administrator, heavy machine operator, firefighter, home renovator, camera operator, video editor, and in numerous aspects of television, film and stage production. Stephen became interested in painting very young, but was also involved in a variety of activities – playing music, photography, darkroom work, painting, sports and dance. Despite varied activity and a busy schedule, Stephen always managed to create artwork, whether painting or creating stage props and set-pieces. Stephen retired to live in Windsor in 2017 to pursue painting fulltime — primarily working in oil and acrylic. The subject matter and styles of Stephen’s paintings vary greatly. Styles include realism, expressionism, impressionism, abstract, and any combination of these styles. He currently has nine series in progress, as well as “one-off” paintings that aren’t part of any particular series. Stephen has only recently begun to show his work again. One of Stephen’s paintings from the Shumka Dance series, “Cobbler’s Daughter” recently won first prize at the Neilson Park Cultural Centre’s IMPACT 2019 juried exhibit in Toronto. First and foremost, Stephen has to be enjoying his art. Whatever you do, if it’s not fun it isn’t worth doing.

Della has been deaf since the age of two. But despite a hard life she has been blessed with a great talent for illustrating. As a child she would create illustrations to tell stories in comic strip format. She later graduated from Gallaudet University in Washington, DC, Arts major English Minor, making the Dean’s Honor List. Following this she attended Sheridan College of Arts and Technology, specializing in Interpretive Illustration, after which she became Senior Creative Illustrator for Ginn and Company Educational Publishing. She was the creative talent behind the Mr. Mugs children’s reading books and workbooks. However, after getting married and having children Della decided to stay home and do freelance work. Her ex-husband, an artist, was not supportive and convinced her that she wasn’t good enough to be in the art world. But she survived her abusive marriage, and she moved back to Ruthven, where she continues to live today. Her children are now grown up, married and living on their own. She has completed a number of book illustrations and greeting cards which have never been published. Della’s style has been compared to Alphonse Mucha’s Art Nouveau and simple Japanese design. She is a master of the drawn line. If not for her abusive marriage she may well have been in the ranks of well-known artists or children’s book illustrators. This is still her inner most desire.

Phil is a well known popular musician in Windsor, playing drums with a number of bands. Phil also designs and builds custom one-of-kind home from his one-of-a-kind mind. He has a passion for sailing, and composing songs on the piano while warbling badly. He also enjoys bicycling, motorbikes, swimming, walking, jazz and cheap Cineplex Tuesday night films. But Phil has always been doodling and scribbling on all sorts of papers – envelopes, stationary, magazines, flyers, bills and important documents. Over the years Phil has realized he has an annual indulgence spending time creating, what he calls, drawings and scribbles. These are highly creative, fanciful and fun drawings, often dealing with audience and musical performance, Every drawing takes on its own life, or “flavour”. Phil works hard, but plays even harder.

One thing that can be said about what these three artists have in common… they’re not done yet!